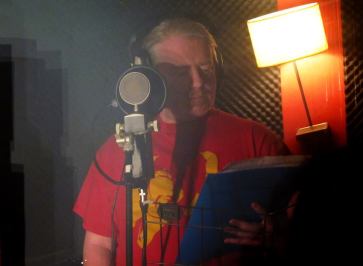 Podcast from the Stretch Outsider Art Festival special- with the “The Falling Man” track from theFireflies &Joe Duggan CD “Surrounded On All Sides”, a chat in the studio about Outsider Art and regeneration, a live reading of my poem “The Price Of Property in London Today”, a poem from Jazzman John Robert Clarke , & fellow Firefly Nina Walsh came along for the chat as well as Patrick Lyons and we also had “Breaking Into Aldi” from the The Fat White Family kicking it off – all ably hosted by Carlotta Allum &George The Technician. Click Here To Listen. First Broadcast  October 19th 2016.

Interview  and 3 poems with the Fireflies .  I come in just after The Beach Boys on 25 mins and I’m followed by Wilko Johnston and Tom Waits at 56 minutes! Great programme featuring “Tuscany” “The Mighty Kong” and “The Falling Man” from the CD produced by Nina Walsh – thanks to Dean Stalhamfor setting it up, Free Seed On Soho for producing and the lovely Anabel Barnston & Ben Ramble for the interview. Click Here To Listen Broadcast October 2016

The Conversational on Reel Rebel Radio
Presented by Naomi Woddis, alongside Jill Abraham and A.F. Harrold 2013
Features interview and reading

Free Thinking on Radio 3. BBC Iplayer
“Dylan Evans tells Matthew Sweet about his experimental community in the Scottish Highlands and why the Utopia Experiment failed. They are joined by Eileen Barker who has looked at communities set up by religious cults and Joe Duggan whose Transition Town in Crystal Palace aims to show you don’t need to leave the real world to start working towards an ideal society.” Broadcast 10th Feb 2015

Andrew Weatherall’s Show on NTS
Very exciting to be collaborating with Andrew Weatherall and Nina Walsh – one of my poems “Downhill” has been brilliantly remixed by Nina and Andrew, a.k.a The Woodleigh Research Facility – it featured on Andrew’s show in June on NTS Radio and has now been archived – you can find it here at 1hour 38mins, just after the Nina and Andrew’s other track “F7 (Second Render) which kicks off at 1hour 30mins. And the whole show is brilliant of course. Some old Sandinos Bar and Derry hands might recognise the words from “The Bunch Of The Chancers” days.Recommend listening on headphones for full effect. Listen